FPP003 is a product candidate that we identified based on joint research with Osaka University and Sumitomo Dainippon Pharma, and is an antibody-inducing peptide (peptide vaccine) that elicits IL-17A (Interleukin 17A) antibodies.
It is currently undergoing the Phase I / IIa clinical study in subject with psoriasis in Australia and the preclinical studies for ankylosing spondylitis in Japan.

For the treatment of psoriasis, the mainstream is a topical medication in patients with "mild to moderate" psoriasis, and phototherapy and systemic therapy are given for patients with "moderate to severe" psoriasis. Monoclonal Antibody drugs against various target proteins are used in patients with previous inadequate response those treatments.
FPP003 has a long-lasting therapeutic effect in nonclinical study, and we believe that it will go to the market as a long-acting drug with a longer administration interval and higher convenience than existing monoclonal antibody drugs. 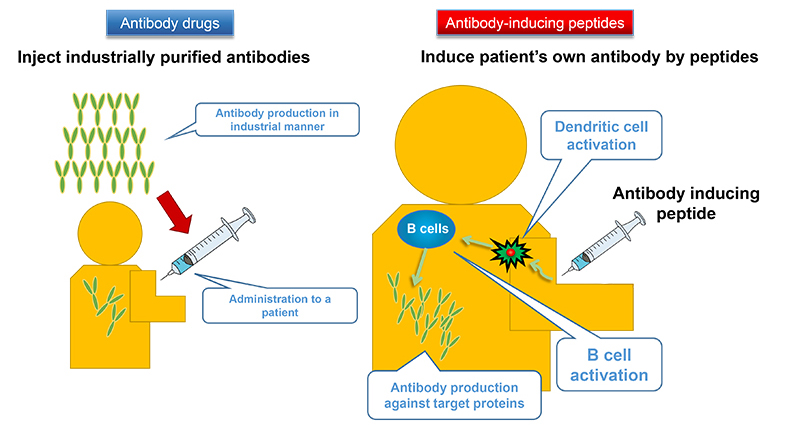 Ankylosing spondylitis, on the other hand, is the systemic chronic inflammatory disease of unknown cause that the spine and sacroiliac joints mainly become a lesion developing during adolescence. On their lesion parts, inflammation and ossification occur, and moreover, pain, swelling, and restricted movement are observed. In severe cases, the spine may be stiffened and daily living ability is severely restricted as a result.
Nonsteroidal anti-inflammatory drugs (NSAIDs) are used to treat ankylosing spondylitis, but antibody drugs are used in case that their effects are insufficient or there are side effects.
Aiming to make FPP003 a treatment option for the rare disease ankylosing spondylitis, FunPep is conducting its research and development with the support of the Japan Medical Research and Development Agency.

FPP004 is a product candidate that we identified based on joint research with Osaka University, and is an antibody-inducing peptide (peptide vaccine) that elicits IgE (Immunoglobulin E) antibodies.
Preclinical studies are currently being conducted for pollinosis as a target disease.
IgE is the major mediator of allergic disease as immediate allergic reactions. Pollinosis, a prominent symptom, is a type of seasonal allergic rhinitis caused by pollen of cedar and cypress, and its main symptoms are paroxysmal recurrent sneezing, (watery) rhinorrhea and nasal congestion.
Monoclonal antibody drug for pollinosis needs to be administered once every two weeks or four weeks, whereas FPP004 has a its long-lasting therapeutic effect in nonclinical study. It is expected that the drug will go to the market as a long-acting drug with a long administration interval and high convenience in comparison to monoclonal antibody drugs.